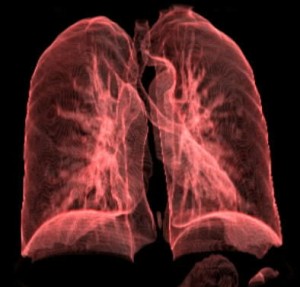 Statistics: Lung cancer currently strikes over 100,000 Americans each year, most of whom will die within the first year of diagnosis. Lung cancer is the number one cancer killer in both men and women. It accounts for 1 of every 3 cancer deaths in men and 1 of every 5 cancer deaths in women. Three fourths of all cases occur in patients between the ages of forty to sixty years, 1% of cases in people under 40. 90% of all lung cancer victims are smokers and 10% of heavy smokers develop lung cancer.

The most common symptoms of lung cancer are cough (75%) and hemoptysis (coughing up blood) (50%). These symptoms are already present in 90% patients at the time at diagnosis. In the remainder, lung cancer is discovered only incidentally on an X-ray done for an unrelated condition. Most patients have metastatic cancer, cancer outside of the lung, at the time of diagnosis.

The 5-year survival rate for all newly diagnosed lung cancer cases is 15% (one in seven). The definitive treatment of lung cancer is surgical resection, complete surgical removal of the cancer; however, only 15-25% of all new lung cancer patients will have resectable disease. To be resectable, the cancer must be small and confined to the chest. If the cancer is not resectable when discovered, most patients will die within 9 months. Even with the latest medical advances, mean survival for stage III non small cell lung cancer has only been extended to 27 months. In contrast, 70% of Stage I patients survive 5 or more years.

If we look at the current standard of care in the United States, which is to not go out and look for lung cancer but to wait until symptoms develop; we find that 4 of every 5 patients with newly diagnosed lung cancer already have disease spread outside of the chest. A virtual death sentence. Early lung cancer detection programs with conventional chest X-ray failed to decrease lung cancer mortality because this test could not find the cancers when they were small enough, or at an early enough stage, to improve survival. For this reason, chest X-ray lung cancer screening programs were abandoned, even for high risk individuals e.g. smokers.

The electron beam CT scanner images the lung in very thin sections in just one breath hold. Using this FDA approved technology, it is possible to detect growths as small as two to five millimeters much smaller than what can be seen with conventional chest X-ray and too small for symptoms to develop. By finding lung cancer at a smaller size, when it is more likely to be confined to the chest, the electron beam CT scanner increases your odds of survival.

90 million Americans are at risk for developing lung cancer because they are current or former smokers. Do you ever worry that about lung cancer? If you don’t, you should. The statistics are scary. Your single best chance of surviving lung cancer is early diagnosis, when the tumor is small, before symptoms develop and before the tumor has a chance to spread. Screening with the FDA approved electron beam CT scanner can save lives.